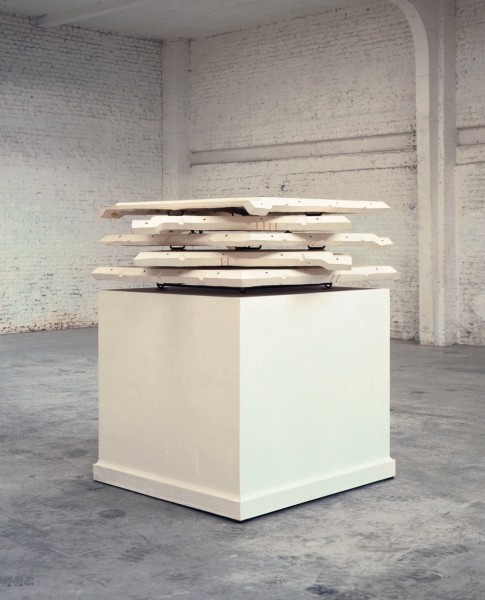 This conversation will explore the unique trajectory of Vermeiren’s work which, at the end of the 1970s, intended at first to draw our attention towards the traditional medium used to display sculpture : the pedestal. But this new focus on the pedestal, far from being tantamount to a postmodern relativism regarding the sculptural fact, has resulted in a series of operations that sublimates the latter. Contrary to what one could have imagined, the pedestal did not serve as a means to move away from sculpture, it was rather a way of returning to its origin and history. Didier Vermeiren’s analysis of the relation between positive and negative, presence and absence, top and bottom, inside and outside, of what is upside down and what is not, have resulted over the decades in a body of work of rare coherency in the contemporary art scene.
(Michel Gauthier)

The conversation will also examine the nine works that form part of the presentation realised by Vermeiren for the exhibition Distance Extended / 1979 – 1997. Part I.

Didier Vermeiren (°1951) lives and works in Brussels. His work has been exhibited internationally and is part of collections such as the Museum of Modern Art (MoMA), New York, Hirschhorn Museum and Sculpture Garden, Chicago, Tate Modern, London, Centre Georges Pompidou, Paris, Van Abbemuseum, Eindhoven and Herbert Foundation, Ghent. Vermeiren is a member of the board of directors of the Musée Rodin in Paris and has taught at the Kunstakademie of Düsseldorf until 2018.

Michel Gauthier is a curator at the Centre Pompidou where he has curated exhibitions devoted to Bertrand Lavier, Claude Rutault, Sheila Hicks and Victor Vasarely. He is currently preparing a Martin Barré retrospective. He is the author of around twenty publications, including the monograph Construction de Distance (2017) devoted to Didier Vermeiren.

The admission fee is 15 euro (8 euro for students) and has to be paid in cash at the reception. Limited seats available. Please make a reservation beforehand via reservation@herbertfoundation.org