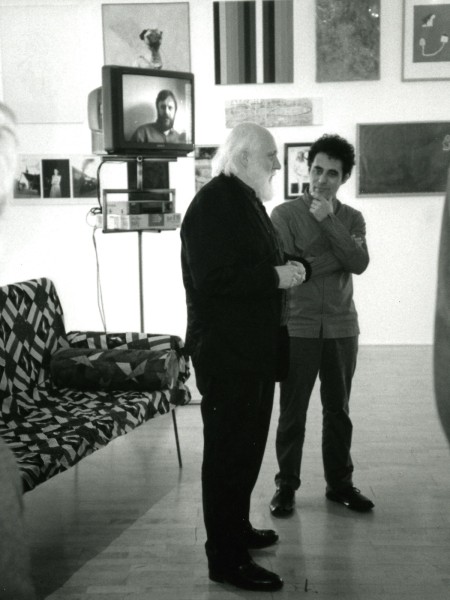 
From October 2000 until February 2001, the collection of Annick and Anton Herbert was invited by Casino Luxembourg. The young institute, led by Enrico Lunghi, was a surprising choice for the second public exhibition of the collection. Along with the first exhibition, which took place in 1985 at the Van Abbemuseum in Eindhoven, the project in Luxembourg marked a turning point in the development of the Herbert collection. An autonomous publication, realised by Yves Gevaert, accompanied the exhibition.

On Sunday 18 December, Herbert Foundation invites Enrico Lunghi and Yves Gevaert to look back in conversation with Laura Hanssens. They will focus on the preparatory phase which preceded the exhibition, the choice and the meaning of the title, the selection of the works, their presentation in the spaces of the Casino and the publication. Above all, they will reflect upon the significance of this exhibition for the further development of the Collection and how it formed the basis for the Foundation.

This event will be accompanied by a small archive presentation. At the end of the conversation, we invite you to have a drink to review the event onsite.

Enrico Lunghi is an art historian, curator and writer, based in Luxembourg. From 1996 to 2008, he was artistic director of Casino Luxembourg – Forum of Contemporary Art, which he founded with Jo Kox. There he curated in 2000 the second public exhibition of the Herbert Collection, entitled Many Colored Objects Placed Side By Side to Form a Row of Many Colored Objects. From 2009 until 2016, Lunghi was general director of Musée d’Art Moderne Grand-Duc Jean (MUDAM). In 1995, 1999 and 2007 he curated the Luxembourg pavilion at the Venice Biennale and curated in 2009 the Venice project 100 Sexes d’Artistes by Jacques Charlier. From 2005 until 2011, Lunghi was president of the IKT (International association of curators of contemporary art). Since 2017 he is in charge of studies for the Ministry of Education of Luxembourg (SCRIPT) and affiliated with the University of Luxembourg (IRMA).

Yves Gevaert was deputy director of the Association for Exhibitions at the Centre for Fine Arts between 1968 and 1977 and subsequently antiquarian specialising in magazines and publications relating to avant-garde art. in 1985 he founded the publishing house Yves Gevaert and he published mainly artists’ books and prints by among others, Marcel Broodthaers, Stanley Brouwn, Rodney Graham, Jan Vercruysse, Lawrence Weiner. In addition, he published essays (Dirk Lauwaert, Frank Vande Veire) as well as catalogues and monographs (James Coleman, Rodney Graham, Harald Klingelhöller, Jan Vercruysse).

This conversation forms part of a sequence of events in line with the presentation It is… it isn’t… with which the exhibition space 106 opens its doors for the first time. Each event focuses on a milestone in the development of the Herbert collection. The series of events is realised in collaboration with philosopher of art and culture Bart Verschaffel (Ghent University).